Muntz metal is a form of alpha-beta brass with about 60% copper, 40% zinc and a trace of iron.

Known both as Muntz Metal and yellow metal, the alloy must be worked hot and is used today for corrosion resistant machine parts.

Its original application was as a replacement for copper sheathing on the bottom of boats, as it maintained the anti-fouling abilities of the pure copper at around two thirds of the price. It became the material of choice for this application. Later it was used to sheathe the piles of piers in tropical seas, as a protection against teredo shipworms, and in locomotive tubes. After successful experimentation with the sheathing, bolts of the same composition were produced. These too proved a success as they not only were cheaper but also very strong and lasted longer. 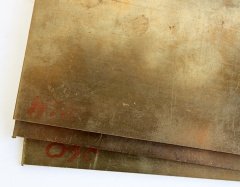 A notable use of Muntz Metal was in the hull of the Cutty Sark.

Scratches, gougings, tears, etc., ruin sheets for utensil purposes to the extent of the damaged area: the undamaged part of the sheet can be used for cutting circles of suitable size from which the utensils are also made.

Sea water and fresh water produce stains; sea water will corrode to depth which may ruin the sheet. So long as the stain is superficial, the sheet can be used, but if rough and pitted, it may have to be rejected.