The conventional route for making steel consists of sintering or pelletization plants, coke ovens, blast furnaces, and basic oxygen furnaces. Such plants require high capital expenses and raw materials of stringent specifications. Coking coal is needed to make a coke strong enough to support the burden in the blast furnace. Integrated steel plants of less than one million tons annual capacity are generally not economically viable. The coke ovens and sintering plants in an integrated steel plant are polluting and expensive units.

Direct reduction, an alternative route of iron making, has been developed to overcome some of these difficulties of conventional blast furnaces. DRI is successfully manufactured in various parts of the world through either natural gas or coal-based technology. Iron ore is reduced in solid state at 800 to 1,050 °C either by reducing gas (H2+CO) or coal. The specific investment and operating costs of direct reduction plants are low compared to integrated steel plants and are more suitable for many developing countries where supplies of coking coal are limited. 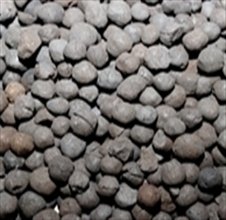 The direct reduction process is intrinsically more energy efficient than the blast furnace because it operates at a lower temperature, and there are several other factors which make it economical:

India is the world’s largest producer of direct-reduced iron, a vital constituent of the steel industry. Many other countries use variants of the process, so providing iron for local engineering industries.

Problems
Directly reduced iron is highly susceptible to oxidation and rusting if left unprotected, and is normally quickly processed further to steel. The bulk iron can also catch fire since it is pyrophoric.

Sponge iron is not useful by itself, but can be processed to create wrought iron. The sponge is removed from the furnace, called a bloomery, and repeatedly beaten with heavy hammers and folded over to remove the slag, oxidise any carbon or carbide and weld the iron together. This treatment usually creates wrought iron with about three percent slag and a fraction of a percent of other impurities. Further treatment may add controlled amounts of carbon, allowing various kinds of heat treatment (e.g. “steeling”).

Today, sponge iron is created by reducing iron ore without melting it. This makes for an energy-efficient feedstock for specialty steel manufacturers which used to rely upon scrap metal.

More information on DRI
Direct Reduced Iron may be in the form of pellets, lumps or briquettes, and is used as a feed for blast furnaces. The material, if wetted, may oxidize rapidly and generate heat over a period of time. In addition, hydrogen may be generated, which could possibly form an explosive atmosphere.

Moulded briquettes minimise certain risks; other products, such as cold moulded briquettes and specially processed material, appear to act similarly. However, as a general precaution, every effort should be made to prevent the ingress of water into cargo compartments. Flammable gases should be prevented from entering adjacent enclosed spaces. Prior to shipment, Direct Reduced Iron should be aged for at least 72 hours or treated with some passivation technique to reduce its activity to at least the same level of the aged product. Holds should be maintained under inert atmosphere (less than 5% oxygen and less than 1% hydrogen) throughout the voyage. Direct Reduced Iron, which has been manufactured or treated in a manner approved by the competent authority to provide protection against corrosion and oxidation by water and air, may be shipped without inerting. If wetting to the top level of a bulk stow occurs then this will not necessarily create a problem. However, a problem may arise if the stow is then moved for loading on to carrying vehicles or into a vessel, at which time the wet material is relocated into the centre of the stow. This commodity has, in some cases, been incorrectly described as Sponge Iron, Iron Pellets or Iron Ore Pellets.

DRI is produced by passing hot reducing gases such as hydrogen, methane and carbon monoxide over iron ore (oxide), which is usually in the form of pellets or lumps. Although the process is conducted at high temperatures, these are still substantially below the melting point of iron. This means that the lumps and pellets retain their original shape, but are considerably lighter owing to the removal of oxygen from the ore. Therefore, the pellets and lumps have a hugely porous structure, which makes the material extremely reactive and prone to re-oxidation on contact with air end/or moisture. These oxidation reactions cause self-heating in the stow, which can lead to auto-oxidation in which cargo temperatures in excess of 900°C can be generated. Moreover, contact with moisture evolves hydrogen, an extremely flammable and sensitive gas that has caused explosions in the holds of several ships following its ignition.

The Adamandas and the Ythan
In 2003 the Adamandas was deliberately sunk by the French Authorities following overheating of her cargo of 21.000 MT of DRI pellets. On 28 February 2004, hydrogen explosions in four of her cargo holds caused the total loss of the Ythan off Colombia, together with the deaths of six of her crew including the Master. The hydrogen had been produced from a cargo of damp DRI fines.

Mandatory 2011
In the wake of this incident, a paper was submitted to the IMO Maritime Safety Committee (MSC) by the Marshall Islands, and the topic has been discussed at subsequent meetings of the Sub-committee on Dangerous Goods, Solid Cargoes and Containers (DSC). Eventually, new schedules were agreed in September 2008 and were adopted by MSC Resolution in December 2008 as part of the new IMSBC Code, which was published in 2009. The Code has been recommendatory from l January 2009, but became mandatory on 1 January 2011.

The door is therefore open for parties to seek exemption from any or all of the requirements for the carriage of this or any other cargo. ‘High Moisture’ DRI Fines containing up to 12% moisture and 75% metallic iron are being offered for carriage without inert gas on the basis that the hydrogen will be removed using the ship’s mechanical ventilation. However, sea trials showed that hydrogen accumulated in the holds in explosive concentrations when the ventilation was suspended for a short period of time, as would be expected during bad weather. Moreover, the recommended ventilation regime would not have prevented the explosions that caused the loss of Ythan. Therefore one should be very cautious when such a cargo is offered. Some manufacturers are blending quantities of DRI fines with fines recovered from the un-reduced iron ore, and offering them as (non hazardous) iron ore fines. Again, caution is to be exercised upon offering such a cargo for shipment. On the other hand, many grades of iron ore are prepared specifically for reduction in DRI furnaces, and are often referred to as ‘direct reduction iron ore pellets’, or similar. These do not require any special provisions for transport by sea, and can be differentiated from DRI (B) by their chemical composition.

The main changes to the Code

All types of DRI

Information to be obtained
Before Loading:
Cargo blends containing DRI (C) can be identified by their chemical composition, details of which must be requested. The chemical composition must include the total iron content (Fe), the metallic (or free) iron content (Feo) and the moisture content. This information should preferably be supported by a certificate from an independent testing laboratory and must relate to the cargo that is being offered for shipment: in other words, a “generic” analysis is not acceptable. The certificate should state the method and standards that have been followed when obtaining the samples that have been tested (preferably ISO 10835: 2000) and the standards that have been followed to determine the metallic iron content (preferably BS ISO 5416: 2006). The date on which the sampling took place should also be checked to ensure relevance.

The iron in a cargo of iron ore is chemically bound with other elements and therefore it contains no metallic (or free)iron. If the cargo contains any metallic iron (Feo), then it must be a DRI derivative: DRI (A) and (B) cargoes typically contain about 85% metallic iron,whereas in blends containing DRI (C) it can be as low as1% or 2%. Such blended cargoes should be regarded as the hazardous commodity DRI (C) and be carried in accordance with the provisions of the Code. If in doubt, expert advice should be sought.

Exemptions from the requirements of the IMSBC Code
For cargoes that are listed in Appendix 1 of the IMSBC Code, such as DRI (C), Section 1.5 allows a competent authority to authorize any other provision or exemption if satisfied that such alternative provision is at least as effective and safe as that required by the Code. Three competent authorities are recognised: the port State of departure, port State of arrival and the flag State. Prior to any shipment covered by such an exemption, the recipient of the exemption must notify the other competent authorities concerned, who may or may not accept that exemption.

Although the IMSBC Code permits an exemption, it is strongly advised to adhere to the carriage requirements as detailed in the IMSBC entry for DRI (C). If carriers choose not to follow this advice, they should satisfy themselves that all of the three competent authorities named above have been notified and have accepted the exemption, that the rules of the flag State Administration are not breached and that the exemption certificate is maintained on board each ship transporting the solid bulk cargoes in accordance with the exemption.

For cargoes that are offered for transport in accordance with an exemption as described above, the loading, carriage and safety procedures must be clearly stated. In particular, the master must be advised of the ventilation rates and durations for each cargo space; the required standard of explosion protection of the ventilation fans; details of the arrangement of ventilation ducts into the holds; the method and frequency of monitoring the hydrogen concentrations in each cargo space; the method and frequency of monitoring the cargo temperatures in each cargo space; the criteria defining an emergency; the procedures to follow in the event of emergency; shipper’s contact numbers in the event of emergency; and the procedures to follow before and during discharge.

The IMSBC Code schedule for DRI (C) sets maximum allowable moisture content as 0.3% for carriage. When cargoes are offered with moisture content in excess of this then they are not compliant, and at higher moisture contents they may additionally pose a realistic risk that they may liquefy in a similar manner to certain iron and nickel ore cargoes. Therefore, any Declaration relating to such cargoes must classify the material as Group A and B and the accompanying test certificate(s) must state the Transportable Moisture Limit and actual moisture content of the shipment. The certificate(s) should also refer only to the cargo that is being offered for shipment, i.e. not a generic measure obtained from previous shipments, and the standards that have been followed when obtaining the samples that have been tested.

The IMSBC Code also addresses cargoes that are not listed in Appendix 1 of the IMSBC Code and provides that such cargoes can be carried under conditions which are defined by and subject to a tripartite agreement between the competent authorities of the ports of loading and unloading and the flag State. However, if a cargo is described as iron ore fines, or one of the other descriptions contained in the background section of this circular, and is found to contain any metallic iron content (Feo), then it should be regarded as DRI (C) and be carried in accordance with the provisions of the Code as the tripartite agreement procedure is for cargoes not listed in Appendix 1 of the Code.