Maersk Line and MSC   have introduced emergency bunker surcharges, and market rumors are that more carriers are about to introduce something similar. But the implementations announced now are not logical and seems more to be fueled by a need to do something urgently, than a need to implement a logical structure to the surcharge. If these surcharges stick, we will be left with the jungle of surcharges becoming more illogical and intransparent.

First of all, it is important to note that the various freight rate indices all point in the direction that the fuel price increases are not yet fully reflected in the freight rates. Even when we take into account that there always is a lag time from the point of fuel prices changes until we see it in the freight rates, we are also beyond that lag time.

Hence, in short, the carriers have a fully legitimate position that they are right now not being adequately compensated for the increases in fuel prices.

But – and there is a big “but” – what is the problem with the new emergency fuel surcharges. There are basically two major problems. 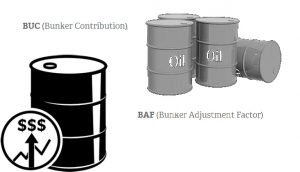 Both Maersk and MSC today mainly operate with pricing structures where bunker surcharges are part of the ocean freight. For Maersk it is the SBF and for MSC it is called the BUC. Maersk on their website write about the SBF: “This charge covers the fluctuations in global bunker costs“. Hence the SBF by its very nature already includes the recent sharp increases in fuel prices. Maersk still charges SBF even in the face of applying the Emergency bunker surcharge.

Hence, logically, only one of two conclusions are possible: 1) Maersk is trying to double-charge for the increases in fuel prices, or 2) The SBF has become entirely ineffective and is de facto not being applied. My take is that it is option number 2 which is the correct one – as has been evident for years, in a weak market any increases in bunker surcharges tend to be undermined by equal erosion of the base rates.

The argumentation would be the exact same for MSC who is already charging BUC which in their own glossary is defined as “Adjustment applied by shipping lines to offset the effect of fluctuations in the cost of bunkers“, but is now also placing an emergency bunker surcharge on top of this. [edit added: and also for CMA CGM and their BAF]

But this also means that we are in a situation where the carriers have acknowledged that the current bunker surcharge mechanism is broken. But instead of replacing it with a new mechanism, they put the new mechanism on top of the old broken mechanism. 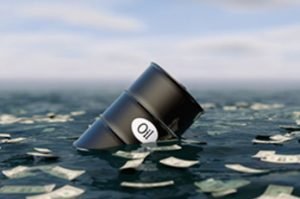 And then what about the new mechanism? In the case of Maersk this is simply a flat fee per container. Irrespective of the length of the journey. Irrespective of the typical vessel sizes used on different trade lanes. By the very nature of this it means that the fuel surcharge mechanism has no clear link at all with the actual fuel price impact on the individual container shipped. Hence the old surcharges, which actually did strive to have a clear link between fuel consumption per TEU on a specific trade lane, are now being supplanted by a mechanism with no such link at all.

MSC is less transparent in their open communication as to the application of their new surcharge simply saying that they are “…introducing a worldwide temporary emergency bunker surcharge on all ocean and land-based cargo carriage with immediate effect.“ Market feedback is indicating that behind this are surcharges which actually do vary somewhat depending on the tradelanes.

Hence what is the point of this rather long posting?

It is very clear that carriers need to be able to adjust their prices to reflect changes in fuel prices. It is equally clear that the “old” BAF-style surcharges have become undermined over the years, which has rendered them ineffective simply because of the spill-over effect between BAF and base freight. This was easy to live with when we were in a low-cost fuel environment, but the increases has made it untenable. Hence the carriers have a “good case” for why rates need to increase to adjust for fuel. The problem is that the way they are attempting to do it now is neither a logical nor a long-term durable solution. The changes in surcharges must be directly linked to the fuel impact on the individual containers – and a fixed fee irrespective of trade and vessel size does not live up to this.

Consequently, it is likely such an approach will be seen very negatively by the shippers, serving not only to undermine necessary efforts to get compensated for fuel increases, but also make it even more difficult for the carriers to implement cost-based surcharges in the future as the one being “sold” as cost-based right now cannot fully be said to live up to the criteria from a trade-lane perspective.

What is needed is a re-introduction of a truly enforceable bunker surcharge mechanism which fairly represents fuel price change outside the control of the carriers, but with these “emergency” actions we seem to be headed more in the direction of illogical short-term fixes and away from a more sustainable long-term solution.

Finally – and this also needs to be taken into account – the fundamental reason for the undermining of the traditional bunker surcharge is that the carriers have engaged in a price competition, de facto extending to include fuel surcharges. No matter of new labelling of surcharges will in itself change this aspect.