Most ores contain less than 10% lead, and ores containing as little as 3% lead can be economically exploited. Ores are crushed and concentrated by froth flotation typically to 70% or more. Sulfide ores are roasted, producing primarily lead oxide and a mixture of sulfates and silicates of lead and other metals contained in the ore. Lead oxide from the roasting process is reduced in a coke-fired blast furnace to the metal. Additional layers separate in the process and float to the top of the metallic lead. These are slag (silicates containing 1.5% lead), matte (sulfides containing 15% lead), and speiss (arsenides of iron and copper). These wastes contain concentrations of copper, zinc, cadmium, and bismuth that can be recovered economically, as can their content of unreduced lead.

Metallic lead that results from the roasting and blast furnace processes still contains significant contaminants of arsenic, antimony, bismuth, zinc, copper, silver, and gold. The melt is treated in a reverberatory furnace with air, steam, and sulfur, which oxidizes the contaminants except silver, gold, and bismuth. The oxidized contaminants are removed by drossing, where they float to the top and are skimmed off. Since lead ores contain significant concentrations of silver, the smelted metal also is commonly contaminated with silver. Metallic silver as well as gold is removed and recovered economically by means of the Parkes process. Desilvered lead is freed of bismuth according to the Betterton-Kroll process by treating it with metallic calcium and magnesium, which forms a bismuth dross that can be skimmed off. Very pure lead can be obtained by processing smelted lead electrolytically by means of the Betts process. The process uses anodes of impure lead and cathodes of pure lead in an electrolyte of silica fluoride. 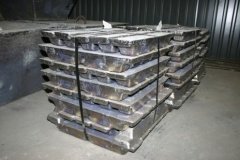 Lead is a chemical element in the carbon group with symbol Pb . Lead is a soft and malleable metal, which is regarded as a heavy metal and poor metal. Metallic lead has a bluish-white colour after being freshly cut, but it soon tarnishes to a dull grayish colour when exposed to air.

Lead is a bright and silvery metal with a very slight shade of blue in a dry atmosphere. Upon contact with air, it begins to tarnish by forming a complex mixture of compounds depending on the conditions. The colour of the compounds can vary. The tarnish layer can contain significant amounts of carbonates and hydroxycarbonates. It has a few characteristic properties: high density, softness, ductility and malleability, poor electrical conductivity compared to other metals, high resistance to corrosion, and ability to react with organic chemicals.

Various traces of other metals change its properties significantly: the addition of small amounts of antimony or copper to lead increases the alloy’s hardness and improves corrosion resistance from sulfuric acid. A few other metals also improve only hardness and fight metal fatigue, such as cadmium, tin, or tellurium; metals like sodium or calcium also have this ability, but they weaken the chemical stability. Finally, zinc and bismuth simply impair the corrosion resistance (0.1% bismuth content is the industrial usage threshold). In return, lead impurities mostly worsen the quality of industrial materials, although there are exceptions: for example, small amounts of lead improve the ductility of steel.

Lead is used in building construction, lead-acid batteries, bullets and shot, weights, as part of solders, pewters, fusible alloys, and as a radiation shield. Lead has the highest atomic number of all of the stable elements, although the next higher element, bismuth, has a half-life that is so long (much longer than the age of the universe) that it can be considered stable.

Lead, at certain contact degrees, is a poisonous substance to animals, including humans. It damages the nervous system and causes brain disorders. Excessive lead also causes blood disorders in mammals. Like the element mercury, another heavy metal, lead is a neurotoxin that accumulates both in soft tissues and the bones.

Metallic lead and some of its alloys do not depreciate in value from immersion in water, salt or fresh. Any superficial staining or deposit can be easily removed by cleaning and polishing if necessary.

In the human body, lead inhibits porphobilinogen synthase and ferrochelatase, preventing both porphobilinogen formation and the incorporation of iron into protoporphyrin IX, the final step in heme synthesis. This causes ineffective heme synthesis and subsequent microcytic anemia. At lower levels, it acts as a calcium analog, interfering with ion channels during nerve conduction. This is one of the mechanisms by which it interferes with cognition. Acute lead poisoning is treated using disodium calcium edetate: the calcium chelate of the disodium salt of ethylene-diamine-tetracetic acid (EDTA). This chelating agent has a greater affinity for lead than for calcium and so the lead chelate is formed by exchange. This is then excreted in the urine leaving behind harmless calcium. According to the Agency for Toxic Substance and Disease Registry, a small amount of ingested lead (1%) will store itself in bones, and the rest will be excreted by an adult through urine and feces within a few weeks of exposure. However, only about 32% of lead will be excreted by a child.

Exposure to lead and lead chemicals can occur through inhalation, ingestion and dermal contact. Most exposure occurs through ingestion or inhalation; in the U.S. the skin exposure is unlikely as leaded gasoline additives are no longer used. Lead exposure is a global issue as lead mining and lead smelting are common in many countries. Most countries have stopped using lead-containing gasoline by 2007. Lead exposure mostly occurs through ingestion. Lead paint is the major source of lead exposure for children. As lead paint deteriorates, it peels, is pulverized into dust and then enters the body through hand-to-mouth contact or through contaminated food, water or alcohol. Ingesting certain home remedy medicines may also expose people to lead or lead compounds. Lead can be ingested through fruits and vegetables contaminated by high levels of lead in the soils they were grown in. Soil is contaminated through particulate accumulation from lead in pipes, lead paint and residual emissions from leaded gasoline that was used before the Environment Protection Agency issue the regulation around 1980. The use of lead for water pipes is problematic in areas with soft or (and) acidic water. Hard water forms insoluble layers in the pipes while soft and acidic water dissolves the lead pipes. Inhalation is the second major pathway of exposure, especially for workers in lead-related occupations. Almost all inhaled lead is absorbed into the body, the rate is 20–70% for ingested lead; children absorb more than adults. Dermal exposure may be significant for a narrow category of people working with organic lead compounds, but is of little concern for general population. The rate of skin absorption is also low for inorganic lead.