Herring are forage fish, mostly belonging to the family Clupeidae. They often move in large schools around fishing banks and near the coast. The most abundant and commercially important species belong to the genus Clupea, found particularly in shallow, temperate waters of the North Pacific and the North Atlantic oceans, including the Baltic Sea, as well as off the west coast of South America. Three species of Clupea are recognized, and provide about 90% of all herrings captured in fisheries. Most abundant of all is the Atlantic herring, providing over half of all herring capture.

These oily fish have a long history as an important food fish, and are often salted, smoked, or pickled. 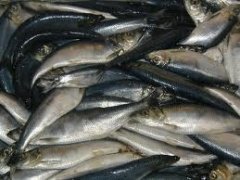 Adult herring are harvested for their flesh and eggs, and they are often used as baitfish. The trade in herring is an important sector of many national economies. In Europe the fish has been called the “silver of the sea”, and its trade has been so significant to many countries that it has been regarded as the most commercially important fishery in history.

There are numerous ways the fish is served and many regional recipes: eaten raw, fermented, pickled, or cured by other techniques, such as being smoked as kippers.

Water pollution influences the amount of herring that may be safely consumed. For example, large Baltic herring slightly exceeds recommended limits with respect to PCB and dioxin, although some sources point out that the cancer-reducing effect of omega-3 Fatty Acids is statistically stronger than the cancer-causing effect of PCBs and dioxins. The contaminant levels depend on the age of the fish which can be inferred from their size. Baltic herrings larger than 17 cm may be eaten twice a month, while herrings smaller than 17 cm can be eaten freely. Mercury in fish also influences the amount of fish that women who are pregnant or planning to be pregnant within the next one or two years may safely eat.

Herring (Smoked, Salted and Reds)
Liable to develop surface mould. Easily broken, especially after wetting. In conditions of high temperature deterioration may be rapid. Light mildew and soft or pulpy flesh is not necessarily due to wetting but to insufficient or defective curing. Mould can be removed with cotton waste dipped in vegetable oil.

Herring in Brine
Shipped in barrels treated on the inside. Have on occasion suffered damage similar to decomposition, being found limp and with skins open, disclosing the roe and very often all the rib bones. This condition may not result from the age of the fish but be due to the time and place of the original catch. Soft and tender-skinned herrings, e.g. summer catches off the north-east coast of England, should not be brine-cured, especially for shipment to warm climates, as they are liable to be delivered in the condition described above. Decomposition becomes rapid on opening of barrels. Deterioration may also be caused by insufficient brine in the barrels, storage at too high temperature and improper treatment of barrels before packing.