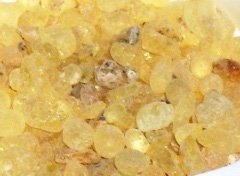 Gum Arabic is a natural gum made of hardened sap taken from two species of the acacia tree; Acacia senegal and Acacia seyal. The gum is harvested commercially from wild trees throughout the Sahel from Senegal and Sudan to Somalia, although it has been historically cultivated in Arabia and West Asia. Gum arabic, a complex mixture of polysaccharides and glycoproteins, is used primarily in the food industry as a stabilizer. It is edible and has E number E414. Gum arabic is a key ingredient in traditional lithography and is used in printing, paint production, glue, cosmetics and various industrial applications, including viscosity control in inks and in textile industries, although less expensive materials compete with it for many of these roles. While gum arabic is now produced mostly throughout the African Sahel, it is still harvested and used in the Middle East. For example, Arab populations use the natural gum to make a chilled, sweetened, and flavoured gelato-like dessert.

Shipment
Contact with moisture will render the gum blocky which, if slight, may be reconditioned by shivering. If damage is severe, general reconditioning is necessary.
The product is subject to loss in bulk if bags or sacks are damaged; it will absorb odours, especially from goods such as spices and hides and skins.

Storage
Stuffing: No special stuffing requirements. dry vented containers are to be used. Stowage is recommended away from heat and away from infested cargo.

Usage
Acacia Gum‘s mixture of saccharides and glycoproteins gives it the properties of a glue and binder which is edible by humans. Other substances have replaced it in situations where toxicity is not an issue, as the proportions of the various chemicals in Gum Arabic vary widely and make it unpredictable. Still, it remains an important ingredient in soft drink syrups, “hard” gummy candies such as gumdrops, marshmallows, M&M’s chocolate candies and edible glitter, a very popular, modern cake-decorating staple. For artists, it is the traditional binder used in watercolor paint, in photography for gum printing, and it is used as a binder in pyrotechnic compositions. It has been investigated for use in intestinal dialysis. Pharmaceuticals and cosmetics also use the gum as a binder, emulsifying agent and a suspending or viscosity increasing agent. Gum arabic has been used in the past as a wine fining agent.

It is an important ingredient in shoe polish, and can be used in making homemade incense cones. It is also used as a lickable adhesive, for example on postage stamps and cigarette papers. Printers employ it to stop oxidation of aluminium printing plates in the interval between processing of the plate and its use on a printing press. Acacia gum is also used to protect and etch an image in lithographic processes. Ink tends to fill into white space on photosensitive aluminum plates if they do not receive a layer of gum. In lithography, the gum etch is used to etch the most subtle gray tones. Phosphoric acid is added in varying concentrations to the acacia gum to etch the darker tones up to dark blacks. Multiple layers of gum are used after the etching process to build up a protective barrier that ensures the ink does not fill into the whitespace of the image being printed.

It is also possible to print from black and white photocopies using a 50% acacia gum solution. This is carefully sponged onto the photocopy, and oil-based ink of any colour is rollered over the photocopy. The ink can be removed fairly easily from the white areas by carefully wiping with a damp sponge and the “paper plate” used to print using an etching press.