Dried fruit is fruit where the majority of the original water content has been removed either naturally, through sun drying, or through the use of specialized dryers or dehydrators. Dried fruit has a long tradition of use dating back to the fourth millennium BC in Mesopotamia, and is prized because of its sweet taste, nutritive value, and long shelf life.

Today, dried fruit consumption is widespread. Nearly half of the dried fruits sold are raisins, followed by dates, prunes (dried plums), figs, apricots, peaches, apples and pears. These are referred to as “conventional” or “traditional” dried fruits: fruits that have been dried in the sun or in heated wind tunnel dryers. Many fruits such as cranberries, blueberries, cherries, strawberries and mangoes are infused with a sweetener (e.g. sucrose syrup) prior to drying. Some products sold as dried fruit, like papaya and pineapples are actually candied fruit.

Dried fruits retain most of the nutritional value of fresh fruits. The specific nutrient content of the different dried fruits reflect their fresh counterpart and the processing method. In general, all dried fruits provide essential nutrients and an array of health protective bioactive ingredients, making them valuable tools to both increase diet quality and help reduce the risk of chronic disease.

Traditional dried fruit such as raisins, figs, dates, apricots and apples have been a staple of Mediterranean diets for millennia. This is due partly to their early cultivation in the Middle Eastern region known as the Fertile Crescent, made up by parts of modern Iraq, Iran and Syria, southwest Turkey and northern Egypt. Drying or dehydration also happened to be the earliest form of food preservation: grapes, dates and figs that fell from the tree or vine would dry in the hot sun. Early hunter-gatherers observed that these fallen fruit took on an edible form, and valued them for their stability as well as their concentrated sweetness.

Today, dried fruit is produced in most regions of the world, and consumption occurs in all cultures and demographic segments. Fruits can be dried whole (e.g. grapes, berries, apricot, plum), in halves, or as slices, (e.g. mango, papaya, kiwi). Alternatively they can be chopped after drying (e.g. dates), made into pastes, or concentrated juices. The residual moisture content can vary from small (3 – 8%) to substantial (16 – 18%), depending on the type of fruit. Fruits can also be dried in puree form, as leather, or as a powder, by spray of drum drying. They can be freeze dried: fresh fruit is frozen and placed in a drying chamber under vacuum. Heat is applied and water evaporates from the fruit while still frozen”. The fruit becomes very light and crispy and retains much if its original flavor.

The high drying and processing temperatures, the intrinsic low pH of the fruit, the low water activity (moisture content) and the presence of natural antimicrobial compounds in dried fruit make them a remarkable stable food. There is no known incident of a food-borne illness related to dried fruit. 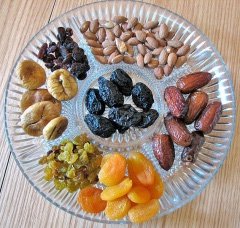 Sulfur dioxide is used as an antioxidant in some dried fruits to protect their color and flavor. For example, in golden raisins, dried peaches, apples and apricots sulfur dioxide is used to keep them from losing their light color by blocking browning reactions which darkens fruit and alter their flavor. Over the years, sulfur dioxide and sulfites have been used by many populations for a variety of purposes.

Sulfur dioxide, while harmless to healthy individuals, can induce asthma when inhaled or ingested by sensitive people. The Food and Drug Administration (FDA) estimates that one out of a hundred people is sulfite-sensitive (allergic), and about 5% of asthmatics are also at risk of suffering an adverse reaction. Given that about 10% of the population suffers from asthma, this figure translates to approximately 500,000 people with potential for sulfite-sensitivity. These individuals make up the subgroup of greatest concern and are largely aware of the need to avoid sulfite-containing foods. Consequently, the FDA requires food manufactures and processors to disclose the presence of sulfiting agents in concentrations of at least 10 parts per million.

Dried fruit is normally shipped in boxes, also in wooden crates and/or bags. Dried fruit should be free of mold and foreign matter (stalks, sand, pests, especially mites) and be clean. They are graded by color and size.

Mould is encouraged by high humidity and possible wetting before shipment. Improper drying may also lead to mould, making the produce inedible. Heat and pressure will cause crystallization and lumping together. Dried fruit should be stowed away from wet, moist and odorous goods.

At 4 – 20°C and 65% relative humidity, the maximum storage duration of dried fruit is approx. one year. At temperatures < 10°C, mite growth is inhibited. Excessively low travel temperatures cause candying due to deposition of glucose (crystallization). Chemical reactions proceed rapidly at temperatures >25°C; considerable syrup formation and self heating may be the result.