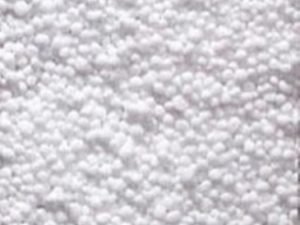 Fertilizer (or fertiliser) is any organic or inorganic material of natural or synthetic origin (other than liming materials) that is added to a soil to supply one or more plant nutrients essential to the growth of plants. Conservative estimates report 30 to 50% of crop yields are attributed to natural or synthetic commercial fertilizer.

Inorganic fertilizer use has also significantly supported global population growth — it has been estimated that almost half the people on the Earth are currently fed as a result of synthetic nitrogen fertilizer use.

Only three other macronutrients are required by all plants: carbon, hydrogen, and oxygen. These nutrients are supplied by water and carbon dioxide.

There are also slow-release fertilizers (various forms including fertilizer spikes, tabs, etc.) which reduce the problem of “burning” the plants due to excess nitrogen. Polymer coating of fertilizer ingredients gives tablets and spikes a ‘true time-release’ or ‘staged nutrient release’ (SNR) of fertilizer nutrients.

Synthetic fertilizers are commonly used for growing all crops, with application rates depending on the soil fertility, usually as measured by a soil test and according to the particular crop. Legumes, for example, fix nitrogen from the atmosphere and generally do not require nitrogen fertilizer.

Studies have shown that application of nitrogen fertilizer on off-season cover crops can increase the biomass (and subsequent green manure value) of these crops, while having a beneficial effect on soil nitrogen levels for the main crop planted during the summer season.

Nutrients in soil can be thrown out of balance with high concentrations of fertilizers. The interconnectedness and complexity of this soil ‘food web’ means any appraisal of soil function must necessarily take into account interactions with the living communities that exist within the soil. Stability of the system is reduced by the use of nitrogen-containing fertilizers, which cause soil acidification.

Applying excessive amounts of fertilizer has negative environmental effects, and wastes the growers’ time and money. To avoid over-application, the nutrient status of crops should be assessed. Nutrient deficiency can be detected by visually assessing the physical symptoms of the crop. Nitrogen deficiency, for example has a distinctive presentation in some species. However, quantitative tests are more reliable for detecting nutrient deficiency before it has significantly affected the crop. Both soil tests and Plant Tissue Tests are used in agriculture to fine-tune nutrient management to the crops needs.