Fibre is often applied in building and construction materials, mainly in roofing and facade products.

Cement describes a binding substance, which will react chemically with water and develop into a material hard as stone. In fibre cement there is a fibre reinforcement, which contributes to making the fibre-cement material even stronger and to better withstand tension. Together with a carefully planned production process, fibre cement makes it possible to develop strong and long-lasting construction materials. 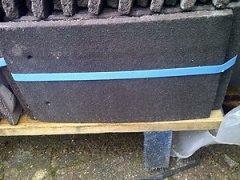 Today fibre cement is considered as a material physically suited for construction products such as cladding and roofing. It is primarily due to its function, performance and commercial value.

Fibre-reinforced cement-products were invented in the late 19th century. 90% cement and 10% asbestos fibres were mixed with water and run through a cardboard machine. Originally, the fibres were of asbestos and the material was commonly used as siding in house buildings due to its low cost, fire-resistance, water tightness, light weight, and other useful properties. After the discovery in the seventies that asbestos is harmful to health and produces lung cancers years after professional or occasional exposure (asbestosis), asbestos use was progressively prohibited and safer fibre alternatives, based on e.g. cellulose fibres were developed in the eighties and applied to secure the widely known strength of fibre cement.

Fibre cement were probably amongst the latest materials on the market to have contained large quantities of asbestos. The reason is that the asbestos fibres are intimately bound to the cement matrix and were first considered to be well immobilized in the cement and less prone to be released in the environment, suspended in the air, and inhaled in the lung than in other materials or applications such as thermal insulation or flocking in which bare asbestos fibres were used. However, asbestos fibres are inevitably released during machining operations of the objects made of fibre-cement and by long-term erosion of the materials exposed to atmospheric weathering and wind when cement degrades. Occupational health concerns and the protection of workers in the fibre-cement factories have finally led to the progressive elimination of asbestos from these products.

Fibre cement is a main component of long-lasting building materials. The main application areas are roofing and cladding.