A dye is a coloured substance that has an affinity to the substrate to which it is being applied. The dye is generally applied in an aqueous solution, and requires a mordant to improve the fastness of the dye on the fibre.

Both dyes and pigments appear to be coloured because they absorb some wavelengths of light more than others. In contrast with a dye, a pigment generally is insoluble, and has no affinity for the substrate. Some dyes can be precipitated with an inert salt to produce a lake pigment, and based on the salt used they could be aluminum lake, calcium lake or barium lake pigments.

Natural dye
An organic colorant obtained from an animal or plant source. Few of these are now in major use. Among the best known are madder, cochineal, logwood, and indigo. The distinction between natural dyes and natural pigments is often arbitrary. 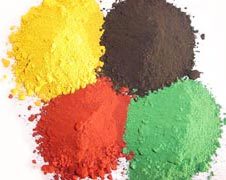 Synthetic dye
An organic colorant derived from Coal Tar– and petroleum-based intermediates and applied by a variety of methods to impart bright, permanent colours to textile fibres. Organic dyes were first synthesized by Perkin in England and were later developed by Hofmann in Germany. Some, termed ‘fugitive’, are unstable to sunlight, heat, and acids or bases; others, called ‘fast’, are not. Direct (or substantive) dyes can be used effectively without ‘assistants’; indirect dyes require either chemical reduction (vat type) or a third substance (mordant), usually a metal salt or tannic acid, to bind the dye to the fibre. A noteworthy development is the fibre-reactive group wherein the dye reacts chemically with cellulose. Dyes may be either acidic or basic. And their effectiveness on a given fibre depends on this factor. Some types are soluble in water, others are not, but can be made so by specific chemical treatment. The central problem is the affinity of a dye for a fibre and this involves both the chemical nature and the physical state of the dye, i.e., whether acidic or basic and whether colloidal, molecular, or ionic. Neither colloidal particles nor dissociated ions are accepted by a fibre; the dye must be in molecular dispersion to be effective.

The essential process of dyeing requires soaking the material containing the dye (the dyestuff) in water, adding the textile to be dyed to the resulting solution (the dyebath), and bringing the solution to a simmer for an extended period, often measured in days or even weeks, stirring occasionally until the colour has evenly transferred to the textiles.

Some dyestuffs, such as indigo and lichens, will give good colour when used alone; these dyes are called direct dyes or substantive dyes. The majority of plant dyes, however, also require the use of a mordant, a chemical used to “fix” the colour in the textile fibres. These dyes are called adjective dyes. By using different mordants, dyers can often obtain a variety of colours and shades from the same dye. Fibres or cloth may be pretreated with mordants, or the mordant may be incorporated in the dyebath. In traditional dyeing, the common mordants are vinegar, tannin from oak bark, sumac or oak galls, ammonia from stale urine, and wood-ash liquor or potash (potassium carbonate) made by leaching wood ashes and evaporating the solution.

Shipped as a powder, liquid or paste, packed in drums, barrels with inner paper bags or multi-ply bags.

Liable to leakage from containers. Some dyestuffs deteriorate if in contact with air. Dyestuffs fall into many different chemical classifications, but they can be split primarily into products soluble and insoluble in water. In the case of soluble dyestuffs any wetting may cause actual loss of dyestuff by leaching the material out of the package. The remaining colour may or may not have undergone some chemical deterioration with a permanent loss in value, or it may merely have changed physically and may be capable of reconstruction by drying and grinding, with comparatively small loss in value.

After becoming damp, insoluble dyestuffs can, in general, be reconstituted by a dyestuff maker, often with relatively small loss in value. Dry pigments, if allowed to become damp or wet, may suffer much greater loss in value than dyestuffs; they would certainly require to be re-treated by a manufacturer.

Neither insoluble dyestuffs nor pigments in the form of aqueous pastes should be allowed to dry out, even partially, and if for any reason drying has taken place they require re-treatment by a manufacturer, and there may be considerable loss. If the pastes are allowed to become frozen, re-treatment may again be necessary and, once again, the loss may be considerable, although in both cases it is sometimes possible to recover the greater part of the value of the material at the expense of the re-treatment and some physical loss. Contamination of any sort may result in loss of value and will probably necessitate re-treatment.

Certain dyestuffs and pigments decompose when heated. In general, no adverse effect is likely below 50-60°C. A number of products melt under the influence of heat, with or without decomposition; if there is no decomposition the material can probably be re-treated, by grinding by the manufacturer, without serious loss. If even partial decomposition has taken place, the products may be a total loss.