Cucumbers are harvested at a range of developmental stages. Depending on cultivar and temperature, the time from flowering to harvest may be 55 to 60 days. Generally fruit are harvested at a slightly immature stage, near full size but before seeds fully enlarge and harden. Immature fruit are green at the edible stage, except in a few cultivars where they are white or yellow. Firmness and external glossiness are also indicators of a pre-maturity condition. At proper harvest maturity, a jellylike material has begun to form in the seed cavity.

Straight, uniformly cylindrical fruit slightly tapered at both ends are of highest quality. Additional quality indices include size, freedom from growth or handling defects, freedom from decay, and lack of yellowing.

Cucumbers are listed as non-climacteric, yet there is a burst of ethylene production that precedes a rapid loss of chlorophyll in mature fruit. Most fresh-market cucumbers are packed in fiberboard boxes. 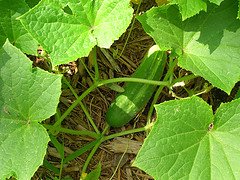 Cucumbers are chilling sensitive and most produce will be injured if stored below 10 °C for more than 2 to 3 days. Sensitivity varies greatly with duration of exposure, temperature, cultivar, growing conditions and storage environment. CA during chilling and high RH after chilling can reduce symptom expression.
Chilling injury is characterized by surface pitting, increased yellowing and disease susceptibility, and development of water-soaked areas of the flesh. Bruising and compression injuries are common when careful harvest and handling procedures are not followed.

Little benefit is realized from the CA storage of cucumber fruit. Cucumbers produce very little ethylene but are sensitive to the effects of ambient ethylene which causes rapid yellowing.