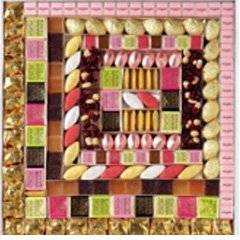 Confectionery
Usually shipped in individual packs inside cartons or cases. Sugar boilings must always be kept in air-tight containers and temperature fluctuations avoided, otherwise they become a sticky mess. Soft fondants are inclined to sweat and form droplets which dissolve the sugar and give a ‘worm-eaten’ appearance. Two points should be noted in carrying out surveys where sugar or sugar products are concerned. Dilute sugar solution may become mildewed and sugar boilings may crystallize on storage, especially if exposed to damp conditions. Where a survey is carried out, care should be taken to establish whether the degree of damage is greater in the centre of the case, or at the sides, as this will give an indication of the cause, whether inherent vice or a transit condition. Exports from European countries incorporate liqueur-filled or cream-filled chocolates in pre-packed retail boxes. If, during transit, there is an increase in temperature it is possible for the fillings to dissolve, although externally there is no apparent damage. The damage is usually first brought to the knowledge of the importer when complaints are received by customers. The problem facing the surveyor is to determine which chocolates in particular boxes have suffered damage, as to open and examine renders each pack unsaleable. It can sometimes be beneficial to open a percentage of the import on a random bases, and dependent on the outcome, to negotiate a suitable allowance on the complete consignment. Alternatively, the consignment may have to be declared a total loss, but salvage may be recoverable dependent upon whether or not there is a brand clause. If there is a brand clause then a cost exercise should be undertaken to determine whether or not removal of the chocolates from the outer retail packs, would on sale, prove to be an economic proposition. Where wetting has caused damage to retail packs of wrapped sweets, removal and bulk disposal should be considered. As a last resort, depending upon quantity, it is possible to dispose of the bulk for processing and extraction of glucose content.

Chocolate
Chocolate comprises a number of raw and processed foods produced from the seed of the tropical Theobroma cocoa tree. After fermentation, the beans are dried, then cleaned, and then roasted, and the shell is removed to produce cacao nibs. The nibs are then ground to cocoa mass, pure chocolate in rough form. Because this cocoa mass usually is liquefied then molded with or without other ingredients, it is called chocolate liquor. The liquor also may be processed into two components: cocoa solids and Cocoa Butter. Unsweetened baking chocolate (bitter chocolate) contains primarily cocoa solids and cocoa butter in varying proportions. Much of the chocolate consumed today is in the form of sweet chocolate, combining cocoa solids, cocoa butter or other fat, and sugar. Milk chocolate is sweet chocolate that additionally contains milk powder or condensed milk. White chocolate contains cocoa butter, sugar, and milk but no cocoa solids.

Chocolate is likely to be affected by the following:
a) Moisture
b) Heat
c) Sudden changes in temperature
d) Infestation by insects if containing dried fruits
e) Age

High temperature and moisture will result in the exudation of the cocoa fat, which forms a whitish covering on the surface of the chocolate. Heat will also cause the surface to be pitted and the chocolate to become friable. Chocolate exposed to low temperatures suffers no real damage; while it remains cold there is little, if any, change in appearance, but when restored to normal temperature tends to absorb moisture from the atmosphere, resulting in discolouration of the surface. Variations in temperature will produce sweating in the form of droplets on the chocolate, dissolving some of the sugar content and producing mildew or sugar bloom. Bloom on chocolate is sometimes mistaken for mildew, but this may be caused by the natural separation of the fats at the surface under certain conditions. Damp conditions also affect the appearance of the chocolate, and shipments to the Tropics may have a white coating due to climatic conditions. In these cases, while the appearance may be affected, the food value is not usually reduced. Affected chocolate may sometimes be reconditioned by melting and adding the required quantity of cocoa fat. If cocoa fat is not available, it may be possible to sell the affected chocolate for pastry making. Chocolate containing dried fruits is liable to infestation by insects. This type of chocolate does not keep well. Chocolate is also affected by ager, the fat becoming rancid. Chocolate made with honey instead of sugar may suffer loss of appearance due to the moisture content of the honey and the resulting formation of mould. The bursting of chocolate creams may be due to yeast or bacteria fermenting the sugar.

Chocolate Crumb
This commodity is susceptible to mould from the atmosphere and, while it is normally packed in five-ply Kraft paper bags or heavy polythene bags, if these become torn there is always the suspicion that mould from bacteria in the air will develop which renders the material unacceptable in the manufacture of foodstuffs. Further problems are sometimes experienced where the material becomes ‘blocky’, which is often the result of improper cooling at the time of manufacture and bagging. Chocolate crumb affected by water damage in any way is unfit for human consumption unless reprocessed, which is seldom an economical proposition.