The cinnamon tree is an evergreen tree with light brown, papery bark and leathery leaves. The tree shows small, yellow-white clusters of flowers in summer, after which oval, purple berries appear.

What in America is known as cinnamon is usually Indonesian cassia (a close botanical relative of the true cinnamon tree). Cassia is not inferior to true cinnamon, merely a slightly different flavor.

Cinnamon and Cassia are the inner bark, peeled and dried of thin stems of a plant of the laurel family. They are very similar and when ground are both marketed as cinnamon. 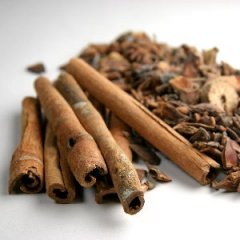 The commodity is usually sold on landed weights, and exporters mostly make allowance for loss of weight due to drying out during transit. The bark when drying rolls inwards, Ceylon cinnamon from both sides, cassia from one side only, forming stick-like quills. The oil content and size of the sticks determine the value. Thinner sticks are usually of better quality. The best quality comes from Sri Lanka.

The inner bark, leaves, and oil are used for herbal preparations and for culinary purposes. Cinnamon Oil is used to aromatize liqueurs and cosmetics.

Shipped in cases and bales.

Moisture, depending on degree, will cause loss of aroma, and subsequent depreciation in value. No dust, foreign matter or black skin should be present. The product is easily broken and should not be over-stowed with heavy cargo.

Stow in a dry place clear of all foodstuffs and other cargo liable to suffer from the scent.

Recommended ventilation conditions are an air exchange rate of at least 10 changes/hour (airing).

While it is technically possible to recondition or redry cinnamon which has been damaged by moist, the process causes such degradation that the spice becomes almost worthless.