Cassava, also called yuca, mogo, manioc, mandioca, tapioca and kamoteng kahoy, is extensively cultivated as an annual crop in tropical and subtropical regions for its edible starchy, tuberous root, a major source of carbohydrates. It differs from the similarly-spelled yucca, an unrelated fruit-bearing shrub in the Asparagaceae family. Cassava, when dried to a starchy, powdery (or pearly) extract is called tapioca, while its fermented, flaky version is named garri.

Cassava is the third-largest source of food carbohydrates in the tropics. Cassava is a major staple food in the developing world, providing a basic diet for around 500 million people. It is one of the most drought-tolerant crops, capable of growing on marginal soils. Nigeria is the world’s largest producer of cassava.

Cassava root is a good source of carbohydrates, but a poor source of protein. A predominantly cassava root diet can cause protein-energy malnutrition. 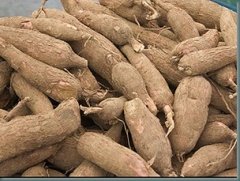 Cassava is classified as sweet or bitter. Like other roots and tubers, Cassava contains anti-nutrition factors and toxins. It must be properly prepared before consumption. Improper preparation of cassava can leave enough residual cyanide to cause acute cyanide intoxication and goiters, and may even cause ataxia or partial paralysis. Nevertheless, farmers often prefer the bitter varieties because they deter pests, animals, and thieves.

The cassava root is long and tapered, with a firm homogeneous flesh encased in a detachable rind, about 1mm thick, rough and brown on the outside. Commercial varieties can be 5 to 10 cm in diameter at the top, and around 15 cm to 30 cm long. A woody cordon runs along the root’s axis. The flesh can be chalk-white or yellowish. Cassava roots are very rich in starch, and contain significant amounts of calcium (50 mg/100 g), phosphorus (40 mg/100 g) and vitamin C (25 mg/100 g). However, they are poor in protein and other nutrients. In contrast, cassava leaves are a good source of protein and rich in the amino acid lysine, though deficient in methionine and possibly tryptophan.

Cassava is harvested by hand by raising the lower part of the stem and pulling the roots out of the ground, then removing them from the base of the plant. The upper parts of the stems with the leaves are plucked off before harvest. Cassava is propagated by cutting the stem into sections of approximately 15 cm, these being planted prior to the wet season.

Cassava undergoes postharvest physiological deterioration, or PPD, once the tubers are separated from the main plant. The tubers, when damaged, normally respond with a healing mechanism. However, the same mechanism, which involves coumaric acids, initiates about 15 minutes after damage, and fails to switch off in harvested tubers. It continues until the entire tuber is oxidized and blackened within two to three days after harvest, rendering it unpalatable and useless.

Cassava can be preserved in various ways such as coating in wax or freezing.

Cassava is used in the manufacture of tapioca, laundry starch and adhesive. Cassava is used worldwide for animal feed, as well. Cassava hay is produced at a young growth stage at three to four months, harvested about 30–45 cm above ground, and sun-dried for one to two days until it has final dry matter of less than 85%. The cassava hay contains high protein (20–27% crude protein) and condensed tannins (1.5–4% CP). It is used as a good roughage source for dairy or beef cattle, buffalo, goats, and sheep by either direct feeding or as a protein source in the concentrate mixtures.

Shipped in sacks and bags. Manioc roots should be white, hard and well shelled, and stored in a dry fresh place whenever possible. With time the hardness will tend to disappear, due to its many sortings. Storage in damp places or placing in sacks before properly dry may cause the formation of a greenish mould. If slight this is merely a film which disappears on brushing. In serious cases the mould may be of dark green or black appearance, being rotten, which will be indicated by dark patches on the sacks in the areas contaminated. In fresh produce, live weevil can only be discovered by cutting open the pieces.

The major cause of losses during cassava chip storage is infestation by insects. A wide range of species that feed directly on the dried chips have been reported as the cause of weight loss in the stored produce.