Urea serves an important role in the metabolism of nitrogen-containing compounds by animals and is the main nitrogen-containing substance in the urine of mammals. It is solid, colourless, and odourless (although the ammonia which it gives off in the presence of water, including water vapour in the air, has a strong odour). It is highly soluble in water and non-toxic. Dissolved in water it is neither acidic nor alkaline. The body uses it in many processes, most notably nitrogen excretion. Urea is widely used in fertilizers as a convenient source of nitrogen. Urea is also an important raw material for the chemical industry.

More than 90% of world production of urea is destined for use as a nitrogen-release fertilizer. Urea has the highest nitrogen content of all solid nitrogenous fertilizers in common use. Therefore, it has the lowest transportation costs per unit of nitrogen nutrient. The standard crop-nutrient rating (NPK rating) of urea is 46-0-0.

Urea is usually spread at rates of between 40 and 300 kg/ha but rates vary. Smaller applications incur lower losses due to leaching. During summer, urea is often spread just before or during rain to minimize losses from volatilization (process wherein nitrogen is lost to the atmosphere as ammonia gas). Urea is not compatible with other fertilizers.

Because of the high nitrogen concentration in urea, it is very important to achieve an even spread. The application equipment must be correctly calibrated and properly used. Drilling must not occur on contact with or close to seed, due to the risk of germination damage. Urea dissolves in water for application as a spray or through irrigation systems.

In grain and cotton crops, urea is often applied at the time of the last cultivation before planting. In high rainfall areas and on sandy soils (where nitrogen can be lost through leaching) and where good in-season rainfall is expected, urea can be side- or top-dressed during the growing season. Top-dressing is also popular on pasture and forage crops. In cultivating sugarcane, urea is side-dressed after planting, and applied to each ratoon crop.

In irrigated crops, urea can be applied dry to the soil, or dissolved and applied through the irrigation water. Urea will dissolve in its own weight in water, but it becomes increasingly difficult to dissolve as the concentration increases. Dissolving urea in water is endothermic, causing the temperature of the solution to fall when urea dissolves.

Urea absorbs moisture from the atmosphere and therefore is typically stored either in closed/sealed bags on pallets or, if stored in bulk, under cover with a tarpaulin. As with most solid fertilizers, storage in a cool, dry, well-ventilated area is recommended.

Urea is shipped in bags, drums or bulk and used as a fertilizer. Urea, grouped as a nitrogen giving nutrient to soil, must not come into contact with alkaline materials such as basic slag or lime. If heated significantly can give off toxic gases. Ensure cool stow in a GP container.

Contamination of bulk urea (granular and prilled) with flakes of hold paint is becoming more of a common occurrence. The problem is not caused by the use of incorrect paints, but more by poor condition or by the fact that paint has been improperly applied, with steel surfaces having not been properly prepared.

This is not helped by the fact that urea is made from a synthesis of ammonia and carbon dioxide. In transit some ammonia is vented and this can work its way under loose paint. Since ammonia is a scourging/cleaning agent it attacks the bond between the paint and the steel surface. 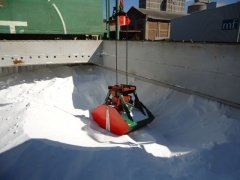 This problem is made worse if the cargo is wet and/or there is water or condensation in the hold. This is because the scourging effect of ammonia is much higher when it is in a water solution.

Recommendations are that ships carrying this type of cargo should not ventilate during the loaded voyage.

No special hazards. Urea is non-combustible or has a low fire-risk. This cargo is hygroscopic and will cake if wet. Urea (either pure or impure) may, in the presence of moisture, damage paintwork or corrode steel.