The Physalis (or ‘Cape Gooseberry’) is a small orange fruit similar in size and shape to a cherry tomato. The berry is enclosed in a bladder-like husk, which becomes papery on maturity. Flavour is a pleasant, unique tomato /pineapple like blend. The husk is bitter and inedible.

The uses are similar to common tomato. The fruit can be eaten raw, used in salads, desserts, as a flavouring and in jellies.

Physalis can be stored under a wide range of conditions. At ambient temperatures, the husks will dry, but the fruit will remain in good condition for about 1 week. The freshness of fruit and husk can be extended by storage at 5°C to 10°C with 70% relative humidity. 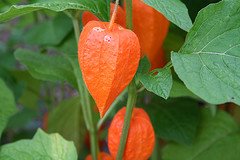 Physalis can be stored for approx. 1 month at 9°C without developing chilling injury symptoms. Fruit begin to show symptoms (surface pitting and decay) after 3 weeks at 5°C; symptoms become more pronounced at 2,5°C.

Superficial moulds occur on the husk during storage under high relative humidity.