Blueberries have a blue to blue-black epidermis or skin that is covered by a waxy bloom, giving the fruit a light blue appearance. The flesh is creamy-white to green in color and juicy. High quality blueberries are free of injury, decay, and sunscald, are fully blue in color with little or no red at the stem end, and appear, as well as feel, turgid. For fresh market, fruit should be fully blue and firm.

Blueberries are non-climacteric fruit and respond to ethylene; but should be harvested near to full ripe as flavour does not improve after harvest. Removal of ethylene from storage air may reduce disease development. One of the most important causes of postharvest decay on blueberries is grey mould rot, particularly following a wet season. It is capable of significant growth even at low temperatures.

Rapidly pre-cooling fresh blueberries to near 0°C and maintaining that temperature suppresses decay development and preserves the market quality. Blueberries with more than a trace of visible decay at harvest have a poor storage potential; hence, they should be marketed promptly rather than be allowed to contribute to storage losses.

Moisture losses can be kept to 2-3% or less during storage and marketing through use of proper packaging, film caps, and maintenance of 90-95% relative humidity. Handling of blueberries should be minimised to avoid damaging the bloom. Blueberries stored at temperatures of 4,5°C and above gradually develop an undesirable tough-textured skin.

Blueberries are not known to be chilling sensitive. Freezing damage can occur at approx. -1,5°C to -2,0°C over long periods of time.

Research with controlled atmospheres showed that CA/MA storage retarded breakdown and decay but entailed the risk of off-flavours. Use of sealed poly-liners increased storage life by reducing weight loss and maintaining turgidity, appearance and flavour. However, prolonged storage beyond 6 weeks at 0°C in film liners sometimes resulted in off-flavoured fruit.

Keep cold. Can be shipped in mixed loads 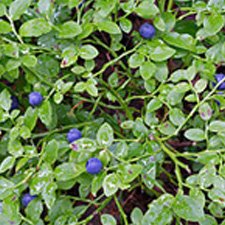