Birdlime is an adhesive substance used in trapping birds. It is spread on a branch or twig, upon which a bird may land and be caught. Its use is illegal in many jurisdictions.

Historically, the substance has been prepared in various ways, and from various materials. A popular form was made from holly bark, boiled for 10 to 12 hours. After the green coating is separated from the other, it is stored in a moist place for two weeks. It is then pounded into a thick paste, until no wood fibres remain, and washed in running water until no small specks appear. After fermenting for four or five days, during which it is frequently skimmed, the substance is mixed over a fire with a third part of nut oil. It is then ready for use. Another popular form made in Asia is from the Ilex integra tree. 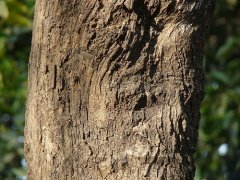 Other versions with varying success were known to be used. Birdlime from Damascus was supposed to be made of sebestens, their kernels being frequently found in it; this version was not able to endure frost or wet. That brought from Spain was said to have a bad odor. That of the Italians was made of mistletoe berries, heated, mixed with oil, as before; to make it water resistant, they added turpentine. It was said that the bark of the wayfaring tree (Viburnum lantana) made birdlime as good as the best.

In the Valencian region of Spain, birdlime (locally known as parany) is commonly used to capture Song Thrush, which is a delicacy throughout Spain and is used in many local recipes. In spite of the EU’s attempts to curb this practice, it is still tolerated in this region.

Birdlime was used in the manufacturing of British sticky bombs during World War II.

Was applicated in the manufacture of adhesives, but gradually disused in modern times.

Becomes dry and pulverisable on exposure to air, but becomes viscid again upon the addition of water.