The avocado may be classed into three races: A: a tropical race with a variable shape and a low oil content; B) semi-tropical a longer shape and a higher oil content; and C) subtropical with a more round shape and thicker skin with a moderate oil content. Many of the commercial cultivars are hybrids of the three races. There is great variability in fruit traits not only between races but between cultivars within a race. One of the most distinct differences between cultivars is the peel color when ripe. The peel of some cultivars changes from green to black or purple with increasing maturity or ripening.

There are many cultivars of avocados grown commercially and they come in assorted sizes and shapes. The primary cultivar is Hass. Other cultivars include Bacon, Booth 1, Fuerte, Ettinger, Fuchs, Gwen, Lamb, Lula, Pinkerton, Pollock, Reed, Waldin and Zutano.

For avocado, the major quality criteria used during grading are size, skin color, freedom from wounds, blemishes, insect damage (particularly due to caterpillar and thrip scarring), spray residues (most commonly copper) and other contaminants on the skin. When ripe, the key issues are absence of disease (body rot and stem end rots), physiological disorders (flesh graying), and physical damage (bruising). Many of these quality factors are cultivar-dependent and consumer preference for size, shape and color can vary from region to region. 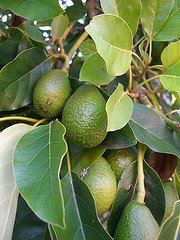 Avocados are one of the few fruit that contain significant quantities of oil; sometimes > 30% of fresh weight depending on cultivar and maturity. Oil content is a key part of the sensory quality. Oil quality is very similar to that of olive oil.

Avocados can be held on the tree for many months after they are physiologically mature (will ripen if harvested) because they do not ripen until they are harvested. However, time-to-ripen does decrease with increasing time on the tree. Freshly harvested avocados tend to have “green” skins although ‘Hass’ fruit that are harvested late in the season may have some skin darkening at harvest. The peel of ripe ‘Hass’ and ‘Lamb Hass’ avocados should have a dark, purple-black or black skin while green-skinned cultivars remain green when ripe. Avocados are ripe when the fruit

Ripening and softening can be delayed by pre-cooling the fruit immediately after harvest and placing them in ethylene-free storage at optimum temperature.

Optimum storage conditions vary by cultivar, growing conditions, time in the season (maturity) and length of storage required. However, in general, unripe avocados should be stored at 5°C to 12°C with RH of 95%. Optimum storage temperatures for ‘Hass’ are 5°C to 7°C for early season fruit and 4°C to 5,5°C for late season fruit. After 3 to 4 weeks storage, ‘Hass’ fruit quality is reduced, and storing fruit for >6 weeks remains a challenge.

When chilling damaged, the flesh of the fruit goes brown, the skin shows sunken spots and is also going brown. Subsequently, the flesh becomes soft and breaks down around the stone. External chilling injury is generally initiated by temperatures of <3°C. However, with increasing maturity the fruit becomes less sensitive, and ripe fruit are less affected. Avocados have the lowest water content of all types of fruit.

During the voyage, controlling respiration processes (release of CO2, water vapour, ethylene and heat) must be aimed at in such a way that the cargo is at the desired stage of ripeness upon reaching destination. Improper ventilation may result in fermentation and rotting of the cargo as a result of increased CO2 levels and inadequate supply of atmospheric oxygen. After transit, ethylene may be used to stimulate (uniform) ripening, as for bananas.

Do not ship with ethylene-producing commodities. Avocados have a very slight, pleasant odour and do not therefore affect other products except for pineapples.

Oxygen below 1% can cause off-flavours and flesh browning. Carbon dioxide above 15% can cause skin browning and off-flavours. Varietal differences in sensitivity to low O2 and high CO2 may be expected.