Scientific name and introduction
Anthurium andraeanum. With their brilliant glossy spathes (the brightly coloured ornamental part of the flower), and slender spadices, anthuriums are classic tropical flowers. New cultivars provide a wide range of colours and forms, and their vase-life can be very long. The elegant blooms of this tropical aroid are produced and sold throughout the world. The true flowers are found on the ‘spadix’, the upright organ in the centre of the ‘spathe’, which is the decorative petal-like organ surrounding the spadix. Although anthuriums are sensitive to low temperatures, they have a long vase-life when properly handled. The end of their vase-life is usually the result of inability to draw water from the vase solution, and is associated with loss of glossiness and then bluing of the spathe. Most of the water lost by the flower evaporates from the spadix. Application of wax, to prevent this water loss or pulsing with silver nitrate to improve water relations of the flower, can extend their vase-life considerably. Anthurium is also known as Tailflower.

Quality characteristics and criteria
Maturity of anthurium flowers is determined by the proportion of open flowers on the spadix. In immature anthuriums, the spadix is smooth. Flower opening starts at the base of the spadix and proceeds upwards; spadices with open flowers are noticeably rough. Harvesting anthuriums when more mature increases overall vase-life. Avoid flowers that show any signs of chilling injury (purpling of the spathe, browning or wilting of the spadix). For maximum life, flowers should be purchased when the spadix, the slender ‘tail’ of the flower, is 50% to 75% rough. The spadix is the true inflorescence of the anthurium, and the rough mature flowers are easily distinguished from the smooth, immature flowers. 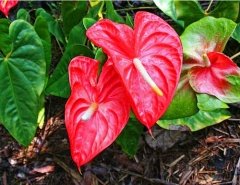 Grading and bunching
Although there are no formal grade standards for anthuriums, top quality implies long stems, uniformity of colour and size, proper maturity, glossiness of the spathe, and freedom from any damage or disease. Anthuriums are normally packed individually.

Ethylene sensitivity
Anthuriums are not affected by exposure to ethylene, and anti-ethylene treatments provide no benefit.

Pretreatments
Some researchers recommend pre-treatment to increase the vase-life of anthuriums, but some cultivars (e.g. ‘Osaki’) achieve maximum vase-life with DI alone. It seems probable that vase-life problems are associated with bacterial contamination of the cut stem bases.

Storage conditions
Anthuriums should be stored at 12,5° to 20°C because they are very sensitive to ‘chilling injury’. Holding the flowers for any length of time at temperatures below 10°C will induce purpling, then browning, and death of the flowers. Anthuriums should therefore never be pre-cooled with other flowers, nor held in low temperature cool-rooms. Anthuriums shipped in mixed loads at low temperatures should be protected from chilling exposure by appropriate insulation (for example wrapping the flowers in newsprint and packing them in an insulated box). Anthurium flowers can be stored for at least 1 week if packed in moist shredded newsprint and held at 15°C. They also respond favourably to storage in controlled atmosphere. Vase-life after storage was increased by 50% when flowers were stored at 12,5°C in 2% O2 for up to 2 weeks.

Packing: Anthuriums are commonly packed in moist shredded newsprint or other shredded paper. Major damage during transportation is the result of spadices puncturing the spathe of neighbouring flowers in the pack. Many producers now sheathe the flowers in small plastic bags and pack the anthuriums more densely in the box.

Special considerations
Anthuriums can have a vase-life of up to 3 weeks if properly treated. Even after storage, vase-life can be adequate if proper techniques are used to handle the flowers. They are very susceptible to stem blockage and easily bruised because of mechanically-induced injuries, especially during packing and unpacking. Keep holding solutions clean by using an effective preservative solution.