Ammonium sulfate (also ammonium sulphate in British English), (NH4)2SO4, is an inorganic salt with a number of commercial uses. The most common use is as a soil fertilizer. It contains 21% nitrogen as ammonium cations, and 24% sulfur as sulfate anions.

It is used largely as an artificial fertilizer for alkaline soils. In the soil the ammonium ion is released and forms a small amount of acid, lowering the pH balance of the soil , while contributing essential nitrogen for plant growth.

It is also used as an agricultural spray adjuvant for water soluble insecticides, herbicides, and fungicides. There it functions to bind iron and calcium cations that are present in both well water and plant cells. It is particularly effective as an adjuvant for 2,4-D (amine), glyphosate, and glufosinate herbicides. 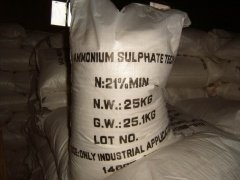 It is also used in the preparation of other ammonium salts.

As a salt of a strong acid (H2SO4) and weak base (NH3), its solution is acidic; pH of 0.1 M solution is 5.5. In aqueous solution the reactions are those of NH4+ and SO4−2 ions. For example, addition of barium chloride, precipitates out barium sulfate. The filtrate on evaporation yields ammonium chloride.

Note:
In November 2009, a ban on ammonium sulfate, Ammonium nitrate and Calcium ammonium nitrate fertilizers was imposed in the former Malakand Division—comprising the Upper Dir, Lower Dir, Swat, Chitral and Malakand districts of the North West Frontier Province (NWFP) of Pakistan, by the NWFP government, following reports that they were used by militants to make explosives. In January 2010, these substances were also banned in Afghanistan for the same reason.

Sulphate of ammonia is a crystalline solid usually packed in bags. When free acid content is excessive, usual maximum being 0,025%, rotting of bags may take place. Bags which have rotted in this way may give the appearance of being torn by rough handling. Bags often arrive in stained condition. Subject to loss in weight. Product to be kept as dry as practicable.