Bleaching earth includes related types of clay soil such as Acid Clay, activated earth and Fuller’s earth. These soils, in which chemical substances have been absorbed are used in chemical industries.

Fuller’s earth is a mineral substance characterized by the property of absorbing basic colors and removing them from oils. It is composed mainly of alumina, silica, iron oxides, lime, magnesia, and water, in extremely variable proportions, and is generally classified as a sedimentary clay. In color it may be whitish, buff, brown, green, olive, or blue. It is semiplastic or nonplastic and may or may not disintegrate easily in water.

Fuller’s earth is a naturally occurring white or brown clay containing aluminum magnesium silicate. Fuller’s earth acts as a catalyst and was named for a process known as fulling – a process used to clean grease from wool and cloth. It is currently used for lightening the color of oils and fats, as a pigment extender, as a filter, as an absorbent (for example, in litter boxes to absorb animal waste), and in floor sweeping compounds. 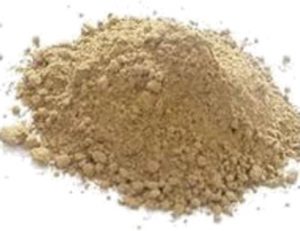 Fuller’s earth was originally used in the fulling of wool to remove oil and grease but is now used chiefly in bleaching and clarifying petroleum and secondarily in refining edible oils. Fuller’s earth is mined in many parts of the United States, Georgia and Florida being the leading producers, and in England near Reigate, Nutfield, and Bath. Before it can be used, it has to be crushed and dried.

Must not be loaded together with cement since cement contamination will cause it to loose its chemical activity. This stowage restriction also applies to loading with Bentonite and Barytes